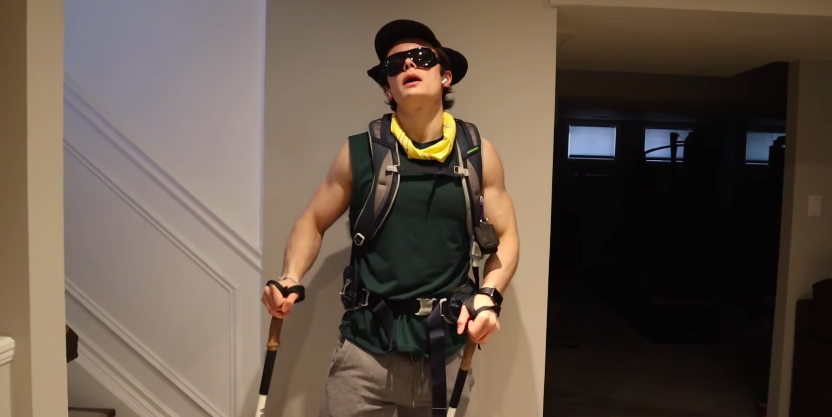 Stuck indoors during quarantine and short on ideas for his next fitness challenge, YouTuber Will Tennyson took some inspiration from his dad, who climbed Mount Everest, and decided to stage his own ascent — without leaving the house.

Mapping out the distance to Base Camp, Tennyson calculated that he would have to climb the stairs from the basement to the top floor of his home 519 times to reach his 2,754 meter elevation goal. He divided his climb across 2 days, climbing 237 flights on day 1, and 282 on day 2.

On the first day of the challenge, he keeps an average pace of around 1 flight of stairs per minute, and notes that one side effect of using hiking poles is that they create a “nasty” pump in his arms.

“My legs are absolute jello right now,” he says after 116 flights. “I have a knotty calf pump and my hamstrings are sore. Also my triceps are sore, because you’re using the pole to kind of press down on the stairs… I can’t remember the last time I felt this hungry.”

He ensures he’s consumes enough calories for the climb, snacking on nuts, dried fruit, and rice cakes. “Generally people lose 10 to 15 percent body fat on the trek, and also just living at that altitude, apparently your metabolic rate is increased by 10 percent… so I know where I want to move when I’m older.” (He also themes his meals around Everest during the challenge, and so dinner on day one is lentil curry with rice, a meat-free dish as the body has to work harder to digest protein at higher altitudes.)

Read More:  3BL Forum Returns This Fall: Save 25% on Your In-Person Ticket Today

While simply going up and down the stairs in your own house might not sound too physically demanding, Tennyson is feeling the effects towards the end of day 1. “I’m definitely relying on these poles more than I should be right now,” he says. “My upper back, traps, shoulders have joined my legs, and they are rough right now. I feel like I’ve just done the most epic lateral raise drop set.”

He completes day one in 4 hours 42 minutes (excluding breaks), and remarks that it’s actually descending the stairs that is causing issues, as the repeated downward motion and bodyweight places strain on his knees.

Tennyson’s pace on day 2 is significantly slower (sleeping in a tent without a mattress, amazingly, is not conducive to a restful nights’ sleep), and it takes him 6 hours to reach his target of 282 flights.

And while reaching the top of the stairs for the 519th time doesn’t carry the exact same sense of achievement as making it to Base Camp at Mount Everest, Tennyson hopes his efforts will encourage others to keep active while they’re in lockdown. “Just because you can’t go to the gym, doesn’t mean you can’t do anything,” he says.