President Trump will stay at Walter Reed military hospital for an indefinite number of days, his doctor said on Saturday, undergoing a five-day antiviral drug regimen for Covid-19 that indicated his condition might be more serious than had been publicly disclosed. On Thursday, he received another therapy that is still in early phases of testing.

Medical experts who have been following the sketchy, conflicting details released by the White House and Walter Reed about the president’s condition were divided about the experimental treatments Mr. Trump, 74, has received. And although they said it was hard to comment on Mr. Trump’s condition or evaluate his treatment given the limited and contradictory information, some said they were worried.

At a news conference on Saturday outside the medical center, Dr. Sean P. Conley, Mr. Trump’s physician, painted a very positive picture of the president’s condition, saying he was doing well, fever-free and not in need of supplemental oxygen.

But immediately afterward, Mark Meadows, the White House chief of staff, contradicted that assessment and said that Mr. Trump’s vital signs in the last 48 hours “were very concerning” and that the next two days would be critical.

Many doctors stressed the critical period of time — about seven to 10 days after infection — when a patient’s condition can take a turn for the worse. Some people respond to an infection with an overly exuberant immune response that can worsen their illness and even prove fatal.

Dr. Peter Chin-Hong, an infectious disease specialist at the University of California, San Francisco, said he would be surprised if Mr. Trump were feeling better as quickly as Dr. Conley had suggested. What often happens, he said, is that a patient will be discharged from the hospital but then, a week later, get much worse and have to be readmitted.

“What we call ‘falling off a cliff’ is usually a week to 10 days into the course,” he said.

But medical experts generally welcomed the close monitoring of the president at the military medical complex, noting his risk factors — he’s an older man who is slightly obese — for developing a more serious form of the disease.

“Transferring him to Walter Reed was the right thing,” said Dr. Carlos del Rio, professor of medicine at Emory University in Atlanta. “Because any of us who have seen patients with Covid, especially patients at his age, can say that one minute they seem fine and the next minute not.”

The doctors at the news conference evaded questions about whether the president had ever needed oxygen; would not say what his temperature or oxygenation levels had been in recent days; and offered up a confusing timeline for diagnosing his illness that conflicted with the 1 a.m. disclosure on Friday by Mr. Trump himself, about 36 hours before the news conference, that he had tested positive for the coronavirus.

“It is a very weird situation,” said Dr. Andre Kalil, an infectious disease specialist at the University of Nebraska Medical Center. “Is he being over-treated or undertreated? We don’t know.”

One of the therapies being given to Mr. Trump, a cocktail of monoclonal antibodies made by Regeneron, is in the earliest phase of testing, and there is only a recent news release from the company regarding its effectiveness. In one trial, the cocktail is being given to recently exposed or infected people, especially those who may not be able to rouse a potent immune response on their own. By age and gender, Mr. Trump falls into the subgroup of people whose immune system may not be able to fend off the virus on its own. 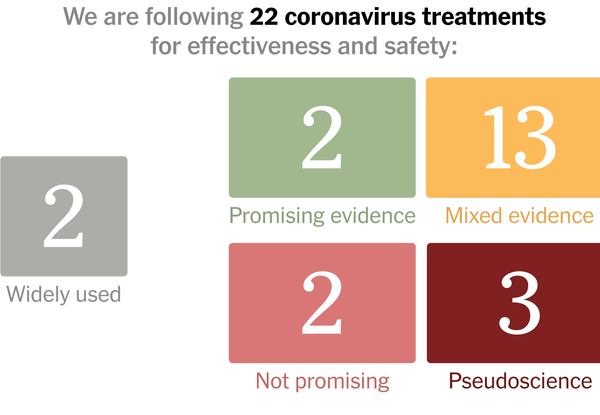 Some experts are optimistic that the Regeneron drug works, and they support giving patients a therapy that directly attacks the virus. Monoclonal antibodies in general are pretty safe, experts said, and similar ones have been used to treat patients with H.I.V. and Ebola.

Other experts were skeptical.

“In my mind these antibodies are experimental,” said Dr. Kalil, a principal investigator for the federal study showing that the other treatment, remdesivir, that is being given to Mr. Trump sped recovery in hospitalized Covid patients.

“I don’t know how safe they are for the president,” Dr. Kalil said. “They should not be given outside of a clinical trial.”

Remdesivir is the standard of care now for some Covid patients, so some participants in a Regeneron trial of hospitalized Covid patients are likely to have received both.

One salient piece of information is the oxygen levels in Mr. Trump’s blood. Doctors said his level was 96 percent while walking around on Saturday morning. Normal pulse oximeter readings usually range from 95 to 100 percent. Values under 90 percent are considered low.

Dr. Rochelle Walensky, chief of the division of infectious diseases at Massachusetts General Hospital, said that although Mr. Trump’s levels were “not perfect,” some older people with other medical conditions can have levels around 96 percent when they are walking around.

Oxygen levels are an important indicator of whether the disease is progressing to a severe phase.

Asked if Mr. Trump was receiving supplemental oxygen, Dr. Conley replied, “He is not on oxygen right now,” and “he has not needed any this morning today at all.”

“They were very adamant to tell you when he wasn’t on oxygen,” Dr. Walensky said. “That implies he was on oxygen. Maybe he has severe enough symptoms to put him on oxygen or maybe his oxygen levels dropped so much that they felt he needed oxygen.” Or, she said, “it could be that when they transported him they just gave him a minimal amount of oxygen.”

“It’s not helpful that he was evasive,” she said, referring to Dr. Conley.

Covid-19 has two phases in those who become severely ill, said Dr. Robert Finberg, professor and chair of the department of medicine at the University of Massachusetts Medical School.

First, the virus replicates and then the immune system overreacts to the virus, creating a different sort of illness that can be hard to control. Chemicals released by white blood cells can result in severe inflammation of organs, especially the lungs and heart, a reaction that can be fatal.

Both monoclonal antibodies and remdesivir attack the virus, Dr. Finberg added, so it should be best to use them early on while the disease is still caused by the virus itself.

Mr. Trump took the first experimental therapy on Thursday — the Regeneron combination of two antibodies. Each of the antibodies is a powerful blocker of the virus in laboratory studies. Like all antibodies, these are proteins — one was isolated from a patient who recovered from Covid and the other was made by Regeneron in a mouse with a human immune system.

Read More:  I’ve been on a ventilator before, so I’d like to sit this pandemic out

The Regeneron antibody cocktail has not been approved, nor has it been given emergency approval use by the Food and Drug Administration, a designation that allows a company to sell a promising drug while it is still being tested. But patients can sometimes get experimental drugs from a company if a doctor requests them and the F.D.A. and the company agrees. That is how Mr. Trump got the antibodies from Regeneron.

The company issued a news release last month citing preliminary data from a continuing study hinting that the drug might help people early on in the disease, and but also hinting that if it is not given early, before a patient develops antibodies, it is probably not worth giving, Dr. Walensky noted.

It is unclear how long Mr. Trump had been infected. The doctors would not disclose when he received his last negative test result; he attended a fund-raiser on Thursday although aides said he was showing some possible symptoms Wednesday and Thursday.

Gilead makes remdesivir, an antiviral drug that has an emergency approval from the F.D.A. as a Covid therapy. The blood tests Dr. Conley mentioned are used to monitor remdesivir. Mr. Trump has had one infusion and will be getting a total of five, as is standard.

But what is not known is whether the combination of remdesivir and monoclonal antibodies is the best way to fight the virus.

That combination, said Dr. Michelle Prickett, a pulmonary and critical care specialist who has treated hundreds of Covid-19 patients at Northwestern Memorial Hospital in Chicago, is “uncharted territory.”

Mr. Trump’s doctor also indicated in a release that the president had been taking a combination of over-the-counter drugs: zinc, vitamin D, famotidine or Pepcid — a drug that blocks the production of stomach acid — as well as melatonin and aspirin.

Zinc, vitamin D, and famotidine, have been touted as helping fight the coronavirus, but the evidence is far from rigorous.

“They are not helpful for Covid,” Dr. Kalil said. And, he added, “they could have interactions,” that make the disease worse.

“There are drugs that could have harmful effects in Covid that are not harmful in other settings. I would suggest avoiding them.”